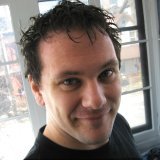 Started gaming in high-school with some friends. We randomly picked the Warhammer RPG to start with and to this day still think the setting and tone of that game was great. (i.e. role-playing & storytelling were always balanced well with the fighty dice-rolling stuff)

I generally like my games to be driven by story and by characters (PC and NPC) rather than by fighting and looting. Although I do want at least one good action sequence of some kind each session if possible.

Intrigue and mystery are my favorite types of adventure although a good dungeon crawl (with some plot) is necessary once in a while.

I’ve DMed occasionally but have mostly been a PC.

NeilCostford updated the adventure log post An Old Soldier, a Riddle, and Bent Iron in the campaign Silver Shadows
August 08, 2013 01:56

NeilCostford created the adventure log post An Old Soldier, a Riddle, and Bent Iron in the campaign Silver Shadows
August 08, 2013 01:39