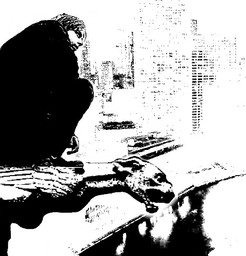 Hey my names David, but please, call me Trenchcoat.
I’m kind of an odd kid, yes kid, I may be 23 but I’m still a kid. I have lots of weird thoughts and ideas and sometimes I do some pretty random things but all in all it’s just about having fun while the candles still burning.

My roleplaying experience started with D&D 3.5, it was a campaign my brother was running and it was pretty fun. I believe I was like 13 at the time. After that however I moved to Idaho and started roleplaying with a another group, but something didn’t feel quite right. From that I moved on to play games in d20 Modern, Spycraft, Star Wars, Fireborn, and L5R, finally landing in GURPS. I now play in yet another one of my brothers campaigns called The Ambrose Chronicles, and another game my friend Eric runs in L5R. It’s all been a blast and now I’m looking to start running my own campaign in the near future once I get back to Illinois.

Tatsumaru : This guy is always gonna be in my favorites, considering he was my first character. The reason why I loved him was that he was a smartass ninja mercenary who did some seriously badass stuff, but only when he was away from his party. Oh and also, for a while he only had one hand, which is badass.

Alkalar : He was my very short lived Dragon from the Fireborn campaign setting. Even though i only got to play him in one session he was still incredibly cool, he was able to breath super hot fire, he had feathered wings, and had a dragon sized spear that he used to fight. And I had created a cool backstory for him that I sadly never got to show off and have since forgotten.

Elkar : This was actually a character I had created as a DM of a D&D campaign that I ran for a little bit. The reason why I loved him is because he was unkillable, I spent two days building him as a character and he was beyond epic level, he was meant to be the unshakable force that pursued the party and could only be killed a certain way. If I remember correctly he was a half-fiend Minotaur Barbarian/Sorcerer/Cleric who prestige classed into both Dragon Disciple and Spider of Lloth. So essentially he was a half-Fiend Minotaur who essentially became a half-Dragon giant spider monster that could go into a berzerk rage and use both arcane and divine magic. Yeah, he was pretty crazy.

Det. Dominic Cross : While I haven’t gotten to really play much of this character I really enjoyed the character itself, and the backstory that I had for him was probably one of my favorites that I have written.

Tatsumaru- Flying monkeys are attacking the party from enormous trees. Hmmmm. Climb a tree. Spot a monkey 5 feet away and 10 feet down. Jump at monkey. Miss. Grab branch to save life. Monkey initiates a grapple. Fight monkey. Fuck it. Let go of branch. Land on monkey.

Tatsumaru- When in his fight with a ninja from his past he gets his right hand (aka Primary hand) cut off.

Tatsumaru- While running away from big cleric of war runs through the original hallway. Vampire on ceiling jumps at Tatsumaru. Reflex check. NATURAL 20! Tatsumaru continues running away from cleric as vampire lays unconcious on ground from head trauma. Bryan does facepalm

Tatsumaru- Sells a ton of loot to buy a most likely evil hand from a shady Sorcerer.

Tatsumaru- Hears a commotion from behind a closed door. Opens to see a thief stealing important documents and climbing out of a rope from a 30 story high window. Sees bleeding man on ground. Stops to stabilize bleeding man. Sees thief already has reached the bottom. Takes a step back and jumps out window. Falls halfway down to the ground. REFLEX SAVE. Grabs rope and slides down effortlessly to track thief.

Tatsumaru- Evil cleric grabs Tatsumaru. Other evil cleric lifts axe and winds up to swing. Swings. Bryan rolls a critical. REFLEX SAVE. Tatsumaru lifts legs and throws himself forward, ducking just under the swing. Suddenly Tatsumaru feels the arms of the evil cleric holding him drop and he feels blood on his neck. Bryan does facepalm

Alkalar- Me: “Ok guys I’m gonna land right next to the evil dragon and blow 3 Karma into my Child of Fire Legacy and blast him with fire.” rolls
Bryan: “Um. You killed him.”
Group: “WHAT?!”
Bryan: “Yeah he’s dead. You killed the main bad guy of the entire campaign.”
Chris: “That can’t be right.”
spend four hours researching rules to find a way around broken mechanic
Me: sips juice box quietly

Det. Dominic Cross- Cross: “Herman, give me the gun.” Herman: “No.” Cross: “You arrogant little brat!” grabs Herman, shoves him against the wall Herman: “TJ! Help!” TJ: from upstairs “Hey bitches! I’m trying to sleep! Either shut the hell up or take it outside!” Cross looks at Herman, drags him to the back room, slams him against the wall and draws his gun Herman: “TJ he’s got a gun!” Cross presses the gun to his throat Cross: “This is to prove that if I wanted to, I could’ve killed you any time.” Herman: “TJ!” Cross clicks the hammer back, Herman faints, Cross puts the unloaded gun back into its holster, looks down at Herman Cross: sigh