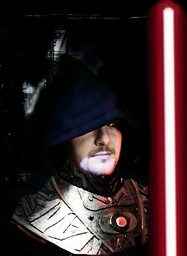 Picture on the right created by Zardog

In the old days, the hand of the GM was a presence that everyone could feel. You never needed to think outside the box, because the box told you what to do.

In Zardog’s D20 Modern campaign, he asked me a question; “What do you want to do?”. For the first time, the Storyteller handed me seemingly infinate freedom. Whatever I wanted to do, he would run with it. It was a momment that would forever expand RPGs for me.

Nickolis Dayson (Ambrose Campaign)- Nickolis lives in the world of reality. He grew up with the idea that everything is explainable. There are a number of rules that are define all. The supernatural events that he has begun to witness are unexplainable. To him, the new parts of the world that he has discovered are chaotic and unruled. (Out of Character: Dude this campaign is awesome. I developed this character to be a normal person. aka- someone who doesn’t have a fighting ability to fall back on. This forces me to think creatively and quickly in the moment.)

Vito Corlione (Seven Seas oneoff)- I loved this character. Playing a cut throat pirate was a very freeing experience. In this session, I took a Lord’s wife hostage, made demands, and fought my way out of the hall and jumped blindly from a tower window.

Desh (Exalted oneoff)- I developed this character with one finite idea in mind. Revenge at the cost of all else. I wanted to create a character that would become the nightmare in the dreams of men. The thing that the brave men fear.

Kazanbai (Rings of Fate Campaign)(formerly Isawa Akira) - Kazanbai has made sacrifices to make sure we succeed, and he will continue to do so.

Nickolis Dayson – (Chasing down Ignatius and arguing with him about Todds death in the storage container.) (Using his Bike Lift as a ramp to jump out of the third story window to escape capture.) (Nickolis playing chicken with a Vampire, power sliding into him, pinning him against a car, and then shooting him so he and Cross could get away.)

Bryan’s Ambrose campaign- (“You hear a noise above you. Slowly your flashlight turns towards upwards…… and there hanging from the ceiling… is a ceiling fan.” LOL), (In a moment of panic, Nick is forced to throw himself under a church pew as Todd lights the stump remover.), (A freakish moment when Nick thought that he would have to kill a PC because he was going to turn evil and eat us. So I had to stab him.)

Desh – (Hands over the limp form of a woman to a party member, only to have that party member realize that the woman was paralyzed from my poison and was fully conscious. lol good times) (Hanging from the ceiling, waiting to spring the ambush.)

Diadoji Kai – (Making the decision to go lone wolf and defend my Clan Champion.) (Taking down a troll single handed. Focusing an attack and putting an arrow into its eye, “Now we are evenly matched.”)

Vito Corlione – taking a hostage, jumping blind from a tower window, one shot a character, miss-directing suspicion, etc. (not in that order)

Michael Odin – (Not surrendering, even in the threat of death.)

Kazanbai – Making the decision to leave the Phoenix Clan and become a Ronin.

Ranna Chamberlan- Hiding in my bath tub waiting for the explosion.