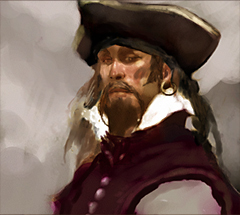 In the fall of 1977, my best friend introduced me to a new game called Dungeons and Dragons. It came in a blue box with a picture of a red dragon on a mound of treasure and two adventurers, a warrior in armor with a bow and a wizard in a pointy hat waving a wand. I was a pretty avid wargamer – board-and-chit, particularly Kingmaker and Third Reich, and metal minis on the sandtable at a local hobby shop - and model builder for a number of years, but this was something new. Instead of a detached commander moving units across a game board on our dining table, I was a fighting man, exploring a labyrinth with a sword and a shield and an empty backpack waiting to be filled with gold and jewels, perhaps from that very same dragon’s hoard I saw on the box.

And that’s how my fascination with roleplaying games began.

At the time I started, Dr. Holmes’ basic set and the Advanced Dungeons and Dragons Monster Manual were TSR’s flagship products. The brown box was still around, and we used the supplements as well as related books like The Arduin Grimoire. We were still months away from the release of the AD&D Players Handbook and about a year-and-a-half from the Dungeon Masters Guide. In the realm of fantasy roleplaying games, D&D‘s competitors were Tunnels and Trolls and Chivalry and Sorcery, but the early hobby was already expanding beyond the fantastic realm to science fiction with Metamorphosis Alpha and Traveller, with its striking black box and the plaintive mayday of the Free Trader Beowulf. In the corners of the hobby were a variety of smaller titles, one of which - Bunnies and Burrows, based on Richard Adams’ brilliant novel, Watership Down – I would play often in those early years.

And that was pretty much that. Gamma World and RuneQuest wouldn’t appear until the following year. Boot Hill was a tabletop miniatures game; it wouldn’t be repackaged as a roleplaying game for another two years.  Melee was a skirmish game as well; Wizards was about six months off, and The Fantasy Trip nearly three years away, along with Bushido, Rolemaster, Top Secret, Space Opera, and a host of others.

En Garde! had been around for a year or two when I started playing and buying tabletop roleplaying games. I remember thumbing through it at The War Club, a hobby store in La Cañada near where I grew up in the foothills of southern California. I was intrigued by the idea of roleplaying a swashbuckling swordsman in the vein of d’Artagnan, but part of the appeal of roleplaying games for me was miniature models, and while The War Club stocked Napoleonics and medieval knights and dragons and monsters and starships and spacemen, I couldn’t find a single plumed cavalier on the glass shelves in their display cases, so the slim, digest-sized En Garde! went back on the rack.

Fantasy roleplaying games were quickly eclipsed for me by other genres. Boot Hill, Top Secret, and especially Traveller were my favorites, followed in the early Eighties by Mercenaries, Spies, and Private Eyes, Chill, and Flashing Blades. Like everyone else, I played AD&D because, well, everyone played AD&D, but what I enjoyed most was trading on the Spinward Main, or raiding the floating island of Dr. No, or prowling the darkened streets of Mad Mesa. I was never a big fantasy literature fan – through my parents I was introduced to science fiction, particularly Robert Heinlein, and from prowling the sci fi section in our local bookstore I read Professor Tolkien’s works, some story collections by Robert E. Howard and Fritz Leiber, and Gordon Dickson’s The Dragon and the George. A family friend introduced me to Edgar Rice Burroughs by giving me a half-dozen of his first edition copies of Tanar of Pellucidar and John Carter of Mars novels. Through my dad I picked up an interest in men’s adventure – Talbot Mundy, H. Rider Haggard, and Clive Cussler - and Westerns – Louis L’Amour and Zane Grey. When I was about six or seven, I bought a copy of Treasure Island at a garage sale for a nickel, which turned me on to Robert Louis Stevenson, and in sixth grade I did a book report on The Three Musketeers, from an abridged edition released with the classic Richard Lester movies. Fantasy doesn’t resonate with me in the same way as science fiction and historical fiction, and my taste in roleplaying games reflects this.

Toward the end of the Eighties I played MegaTraveller, Marvel Super Heroes, and a little Warhammer Fantasy Roleplaying, but by 1989 I was done with roleplaying games. Work and school and the woman who would become my wife took up most of my time, but the truth is, I simply lost interest. Most of my original gaming books – many of them first editions – were destroyed in a flood a few years later. If I could have back a moment in time, it would’ve been moving my boxes of game books into storage in my parents’ loft.

For twelve years I rarely gave tabletop roleplaying games a thought – I missed all of 2e AD&D, all of T:NE, all of World of Darkness – until I moved to Fullerton and (re-)discovered The Game Castle. In 2001 I picked up 3e D&D and started playing again, with a group at Cal State Fullerton. As before, I played D&D because, well, everyone played D&D, but the release of d20 Modern and Mutants and Masterminds opened up opportunities for me to move into the genres I really wanted to play. Around 2005 I had the wild idea of releasing a supplement of stock d20 Modern non-player characters, inspired by 1001 Characters for Traveller. I found a copy of 1001 Characters on eBay, to use as a reference, and flipping through the pages I was struck by how simple and efficient character stat blocks are in Traveller compared to d20 games. It was only a week or two later that I ordered the reprint books from Far Future, and my personal ‘old school renaissance’ was under way.

In 2008 I picked up an anthology of Robert E. Howard’s ‘Oriental’ stories, historical fiction set in the Near East. One of the stories, “The Shadow of the Vulture,” set at the siege of Vienna in 1529, inspired me to track down the Fantasy Games Unlimited cape-and-sword roleplaying game, Flashing Blades, and since 2010 I’ve been running a campaign set in 1625 France.

In 2012, I started a blog, Really Bad Eggs, a sort of thinking-out-loud workshop of ideas for cape-and-sword tabletop roleplaying games.

I’m a native Californian, a happy husband and proud father of two little gamers, and an avid paddler and cyclist.

GamingMegaverse updated the adventure log post The End of the Desperate Desperadoes in the campaign Damnation
April 26, 2022 00:13

GamingMegaverse updated the character Marsh in the campaign Damnation
April 20, 2022 06:12

GamingMegaverse updated the character Santiago in the campaign Damnation
April 17, 2022 00:24

GamingMegaverse updated the character Santiago in the campaign Damnation
April 17, 2022 00:08